The Symphony of Eternity is a lore-based heavy RP guild made up predominantly of Blood Elves, though it is not race-specific. SoE strives for excellence in RP but also do some end-game raiding (even if it is not the focus of their existence) and some group PvP (World, BG and Arena). Their focus is more on the people within the guild, ensuring that they have friends as well as guildmates. 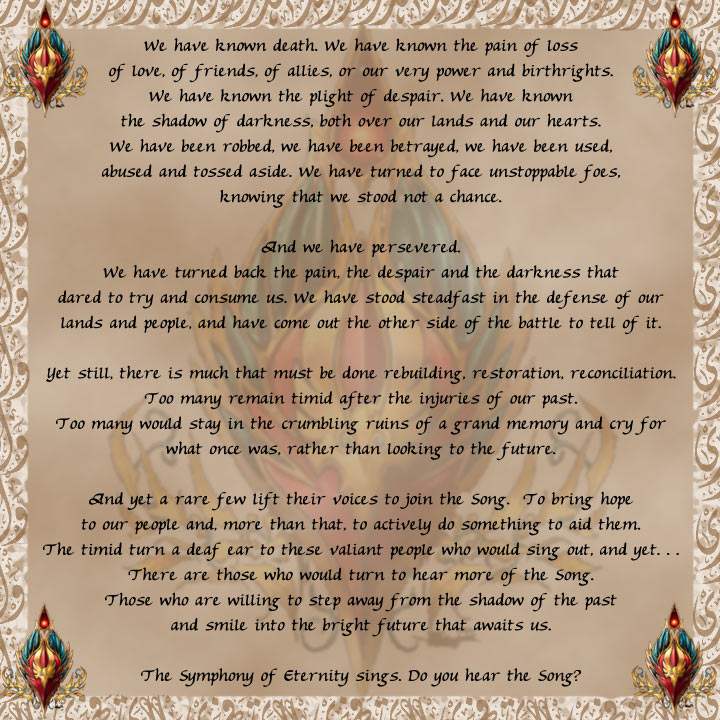 Is the guild only open to Blood Elves?
No, though the characters involved must also share the vision of the guild. We have several members from other Horde races, but most are either former Sin'dorei themselves (but are now Forsaken) or have worked into their backstory a way for their characters to share our guild's goal.

What type of RP guild is Symphony of Eternity?
We consider ourselves a heavy RP guild, but do not have an IC guildchat. The reason for this is there's plenty of opportunity for our characters to get to know each other, but guild chat is the means that we use to get to know the player. If you didn't want actual human interaction with your RP, then perhaps an MMO was a bad idea. We do have an IC channel that is frequently used both for IC silliness and serious matters.

Are there Sin'dorei nobles amongst the Symphony?
If there are, then it's not a big issue with us, as they've obviously accepted our ideals and embraced the idea of change. We believe the nobles of Silvermoon, while they have their uses, are mostly responsible for the corruption in the race and are the biggest threat to the complete downfall of the culture. We've seen what happens when nobles cling to their ways in the face of dire need for change, and we don't want to repeat their mistakes. (Hi, Lordaeron.)

To clarify, if a noble is willing to hear the Song, then they're fine with us. If a noble in our ranks is found wanting to fight just to maintain their titles or estate, we'll have to have a talk.


Retrieved from "https://sentinels.fandom.com/wiki/Symphony_of_Eternity?oldid=8200"
Community content is available under CC-BY-SA unless otherwise noted.