Warning, this page contains language suitable only for teen and above.

Description: Alessandrae seeks vengeance for the past and searches out information that could lead her to her husband. 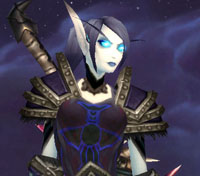 Alessandrae didn’t miss the irony that had became her life, or rather unlife, as she stepped into the dank and dimly lit tavern. Once upon a time she would have balked at the idea of setting foot into a place with so many undead but now the old building and its rotting patrons were more soothing than the grandeur of Silvermoon had been. She tested her luck every time she went to Silvermoon. People that knew her lived there; people that thought she was dead lived there, people she would prefer kept thinking she was dead. Here in Brill, things were different, she stood out more being a blood elf among walking corpses, but here one actually knew or cared who she was.

She looked around the tavern, looking for a familiar face. All forsaken and other animated corpses had at one point in her past looked the same but now she could see them each individually. It was amazing how death changed one’s perception. In life she had only ever really been exposed to one forsaken, a warlock that her husband reluctantly associated with. The flight master in Undercity had been pretty sure she would find her here.

Her eyes fell on a table in the corner, the single occupant expertly stitching thread through fabric. It took a second for Alessandrae to recognize her but the marks on her cheeks and her eyeless sockets looked the exact same as the last time she had seen her. The warlock had changed her hair but wore the same tatty old purple robe. Next to her was an annoyed looking imp staring at his master’s hands. He looked up to Alessandrae when she approached and the warlock froze in her stitching. For a second the woman looked surprised before her lip twitched in what could have been an amused smirk if it had been paired with a lower lip.

“Candace.” She stated the name as though it were an accusation. “I see you haven’t changed.”

Candace looked up in her general direction and tilted her head.

Alessandrae took the seat across from the warlock. The last time she had seen Candace she had been almost horrified of her, torn between looking her in the face in disgust and looking at her own high fashion shoes. Things were a little different now, Aless was a little different. A question came to her that she had always wanted to ask but had been too afraid to voice.

“How the hell can you see without any eyes?”

Candace jabbed her thumb in the direction of the imp at her side. “I don’t keep this waste of a soul shard around because he’s good company. It’s in the pact I have with my summons; I use them as eyes.” The imp turned his head to give her a spiteful look and Candace whacked him with her free hand. “Don’t look at me, dipshit, look at her!” The imp muttered something that sounded like it might have been an expletive but obeyed and looked at Aless with a bored look on his face. “I hate using Tartuk but Jhomnak sees things all funky and Zahthea keeps hitting people with her whip.”

Aless sat back in her chair. “Your pigtails make you look like an oversized gnome.”

“That’s what I think, too, but Zahthea insisted they were ‘in’ or something.” She snorted and shook her head. “Anyways, I assume you didn’t come all the way out to Brill to discuss the latest fashion trends of undead. What do you want?”

“Let me guess, want to find that loving hubby of yours.” Candace cackled darkly. “Nice reunion planned out for him?”

“The only nice reunion will end with his skull cracked open by my axe.”

Alessandrae didn’t answer, only stared directly into the forsaken’s face. Candace, however, continued to look smug. She lifted her bony hand and rubbed it along her skinless jaw in thought.

“I’ll tell you what I know but cover me in fur and call me a pussy. I’m curious. What happened to you?” She leaned forward as if she could better hear the tale. “Before you were a snobby pansy with more money than brains. Your head was shoved so far up your husband’s ass that whatever light your priestly ass worshiped was probably a hallucination from the shit you were suffocating on.”

Alessandrae looked down at the table darkly. She didn’t want to admit how true Candace’s words were but her hindsight was 20/20 and she could see everything so clearly. Self hatred welled up inside her like a cancer.

“I was pathetic,” she said, pausing to grit her teeth so painfully it actually eased the ache in her dark soul. “I got sick of waiting on him, day after day, a dutiful wife. I honestly thought that whatever he had left me for was for a greater good. I had brainwashed myself despite the obvious.” She exhaled a sigh and closed her eyes. “He would have left without telling me had I not woken up, instead he choked me with lies that he would return. I estranged myself from my family when I married him so I was pretty much alone day in and day out. When they were asking for Priests to go to the Bulwark, I jumped on it. Maybe I thought I’d see him, I don’t know.” She leaned forward and put her elbows on the table.

“Or maybe when he came back and saw you weren’t useless he would take you along next time,” Candace said with a grim look on her face.

“Yeah,” Aless said softly, taking an interest in the purple fabric that had been forgotten about on the table .

“I hate to break it to you, honey, but he never had any intention of coming back to you, or to Silvermoon.”

“I KNOW that!” Alessandrae bellowed, angry at Candace vocalizing thoughts she had been suppressing with all her will. She forced herself to calm down, not wanting to lose the chance at the information Candace might have. “I know.” She repeated her voice more stable, almost apologetic. “That’s why I’m here looking for him.”

Candace took a deep breath before letting it out and Alessandrae worried she might refuse to give the information now.

“I saw your precious husband not long after he left you. He came to me looking for Devlin.”

“Devlin? He hated Devlin, why would he want to see him?”

“He wanted to... finish some stuff before he left.” Alessandrae kept silent, wanting Candace to elaborate. “He killed Devlin, as far as I know. To be honest, if you want more information you’re going to have to hunt down that redheaded girlfriend of his.”

“Osirius? Is she in Silvermoon?” Alessandra was already standing up, ready to hunt down the redhead and get what information she might have.

“No,” Candace said and Alessandrae groaned before sitting back down. “But I imagine she went back to Theramore. I was at Thunderbluff for some reason or another when she came there seeking help to get rid of her fel addiction. I’ve never seen so many cows so willing to help a blood elf before.” She snorted sarcastically and shook her head. “Anyways, that’s when she told me about Devlin’s death. I just assumed your husband succeeded in his goal and kept my mouth shut. Always thought she was a weak little brat but she went through hell to get clean, it nearly killed her; I suspect she was hoping it would. Too bad, I had 100 gold on her to give in and blow an imp to get a fel fix.”

“I can’t imagine she would have been dumb enough to go back to the Alliance after betraying them.” Candace just shrugged in response and Alessandrae let out a long drawn out sigh and rolled her head back. “Well, if she’s alive, I’ll find her.”

Silence fell between the two, the sounds of the other patrons seemed to dim for a moment as Alessandrae’s thoughts became heavy with her long journey ahead.

“You know, he might be dead as well,” Candace suggested with an air of foreshadow.

“If he is, I’ll raise his rotten corpse and put his soul though every ounce of torment I went through.” Alessandrae’s words were hard with resolve, “but he’s not dead. I know he’s not.”

“Then for your sake, I hope he is dead,” Candace said sharply Alessandrae looked at her harshly. Candace just continued, “He would crush you.”

Alessandrae pounded her fist on the table so hard it made noises as if it were going to give. “I’m 10 times stronger than I ever have been!”

“You have a long ways to go, death knight.” She spat death knight as if it were a curse, “Your husband didn’t stay idle. He left to become stronger. He left you so you wouldn’t drag him down and as far as I can see, you’re lucky he didn’t just kill you then. If he is still alive he’s twice as strong as you are.”

Alessandrae’s face hardened as though she was going to challenge Candace’s words but finally forced out a sigh. Candace was right and Aless knew it.

“And what do you think will happen when you do, Alessandrae.” Candace remarked. “Maybe a glorious battle in which you come out the victor, he at your feet begging forgiveness? Perhaps you imagine you will lift your blade to strike him down or maybe you think you will accept his forgiveness. He will see that you aren’t a liability and that you do make him stronger. Together you both go riding off into the sunset like some sick human romance novel.” She snorted and shook her head, her lip curled up in disgust. “Don’t delude yourself.”

Alessandrae was silent in her guilt. Candace, with her eyeless perception was once again closer to the truth than Aless cared to admit.

“Do yourself a favor. Go back to Silvermoon, dress up in those fancy robes you always used to wear and play pretty spoiled ignorant elf.”

Alessandrae moved instinctively, grabbing the axe from her back and embedding it into wood. Candace didn’t budge, but her imp jumped back with a yelp. Others in the room looked at them startled and she could hear someone yelling at her to watch it or she would be kicked out. She ignored them and leaned in closely to the warlock.

“I will find him and I will kill him,” She said with an all new resolve.

Candace nodded calmly. “Then the first thing you need to do is give in.”

She leaned in closer to Alessandrae. “You still think you are so much better than me but really you’re just as dead as I am, the only difference is you’re stitched together better than I.”

“You’d be surprised. I have a new respect for the undead.”

“That’s good. I haven’t developed any respect for you.”

“I don’t need your approval.”

“But you want it. You want to feel like you’re not alone and that someone else feels your struggle,” Candace leaned back “Go find Osirius. I’m sure he will give you all the sympathy you can want.”

Alessandrae finally pulled back, pulling her axe from the table and put it back on her back. “The only think I want is information to find my husband.”

“And Osirius can give you that too.”

Retrieved from "https://sentinels.fandom.com/wiki/Seeking_Vengeance?oldid=6906"
Community content is available under CC-BY-SA unless otherwise noted.