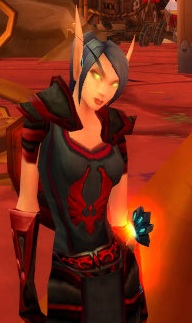 Noralin stands at 5'8" and weighs in at 155 pounds with an athletic build and long legs, her body sculpted and very well toned from wearing heavy armor and carrying a shield all day. Her skin is lightly tanned, her shiny raven black hair is often pulled back into a ponytail, when down it falls to the middle of her back, always kept neatly trimmed and well groomed. She now always wears a gold barette in her hair with two rubies with a single solitary diamond in the middle and simple whisps on either side of the diamond. Her eyes light green and framed by thick lashes. Her facial features are soft and quite feminine. She stands in a very formal posture at all times and moves very gracefully and with purpose. She wears several earrings in each other and has a navel piercing, a gold hoop with a red gem hanging from it. Her plate armor and weapons appear very well cared for and kept in pristine condition. When not on duty, she tends to dress up, seeming to take great pride in her appearance. She appears to be fairly young (in her early twenties to human standards).

While on duty and with strangers, she tends to be rather formal and serious, seemingly taking her job quite seriously. While off duty, she still remains a bit formal with most people, she's generally friendly and polite though sometimes a little awkward with very out-spoken people or those of another race. She can be rather playful and even mischievous with those she feels comfortable with and is close to. She greatly admires chivalry and those who show that quality. She loves cats and has one of her own called "Shadow" whom she spoils to death. One of her secret and guilty pleasures is romance novels, often reading them in her spare time, if she ever admits to reading them, it's obvious that she's quite embarrassed by the fact that she enjoys them so much though it never prevents her from continuing to read them.

Noralin had two siblings she knew of, an older brother and a younger sister. Her father was a paladin and her mother a priestess. Nora and her sister were both studying and training to become priestesses as well. The family were all killed by Arthas, Noralin managed to survive by hiding in a crawl space in their home. She rarely speaks of her family and never mentions how she survived, being rather ashamed and feels as if she was a coward for hiding instead of trying to help.

She was old enough to care for herself after that and continued her studies until she began taking notice of the Blood Knights and the way many of them conducted themselves. She feels that too many of them focus on the former word of the Blood Knight title and too little on the latter. She decided to abandon her priestess training and join the Order and strive to become a good example of a Knight. She has since discovered that she had another older brother, Knight-Lord Nestarion, (who turned out to be her superior) who had left the family when she was very young. She seems quite excited and joyful that she has family to share her life with.

Currently, Noralin has been courting Manwendil Shen'alan, another Blood Knight Master whom she had admired as being a worthy Knight and quickly developed a friendship with and has recently turned into something much more. It's quite obvious when she speaks of him that she is very happy in their relationship and can sometimes be heard calling him by the nickname "Wendy."

Retrieved from "https://sentinels.fandom.com/wiki/Noralin_Sunsavior?oldid=8761"
Community content is available under CC-BY-SA unless otherwise noted.