Sorry about the wait, I'll finish this up eventually! Keep checking back for more 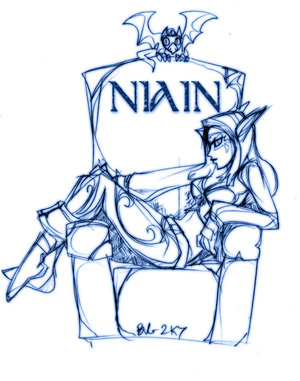 Don't touch what you can't afford.
And I'm priceless.

The meaning of this cloth is rarely explained, but touching it could mean a death wish.

((Not finished. Need to figure out which of Nia's many outfits to describe here. ^_~))

"Sometimes memories are left behind for a reason." - A wise sister.

Many years were spent in a life buried in shadow. Few know of it, none speak of it. Those who knew of this past life are gone, now. A sister possibly slain in Hyjal, the other gone insane after a fateful experience in the Wailing Caverns. Parents long gone, mortality ending shortly after it was gained. Memories remain, of smoldering ruins, haunting wails and piercing screams, taunting the rogue in her dreams. She knows they belong to her. Not her voice, but hers all the same.

((Not done, of course, but I felt like I needed to add something.))

Memory is merely a record.

I need only rewrite that record

Niain's thoughts on life range from simple opinions, to thoughts that you have to be Niain to understand (And sometimes, even then, you don't understand). She's a devout follower the status quo, and is just short of metathesiophobia. She doesn't quite fear it, she just does not like it. Unless she causes it or wants it, of course. Most certainly a fan of double standards. Completely unaware that she does it the way she does, she'll often expect people to hold to standards that she is quite unwilling to hold herself to, and can be known to react in an usually violent manner if the infraction violated her enough.

She's a fan of privacy. Her own privacy, that is. She'd invade yours all day long if you kept her entertained or amused in one way or another. While one to know how to keep a secret, she is always eager to pursue the darker ones, and use them as her leverage.
Intelligent people fascinate her. If she can find someone that can maintain a steady conversation with, she'd be happy for quite the while. She tends to enjoy talking about other people than herself, feeling that her life is none of your business until she feels that she needs to cram details about herself down your throat, and then you're stuck with listening or walking away.

She enjoys working her way under someone's skin, finding the cracks in a persona and exploiting it to her own twisted entertainment. Figuring out what makes someone react one way, and what makes them act the other. Whenever she meets anyone, her main goal is to learn them inside and out. "One never knows when some body may be useful" As she says.

((I tossed this together in about fifteen minutes, I'll work on adding more and clarifying further ... later.))

Careless and headstrong, Niain brazenly goes where no other self respecting Kal'dorei would venture. She studies the Arcane. The forbidden part of life. Just another taboo this woman explores. From the simple arcane missiles, to the complex weaving of a portal -- however, not ones directed to the major cities -- she has a hunger for this knowledge to match even the most ravenous of these new blood elves. Fueled by the need for power and that need to best the magi that always seem to be besting her in one way or another, she has spent many weeks in what once was the orc home world, simply slaughtering. Her blades find the throats of Sin'dorei, and her gifted fingers find their signets. Which soon enough fall into the hands of a Scryer higher up, and she earns herself a teasing tidbit of old magic. Most may be seen as simply worthless, but she'll find a use for the most mundane of abilities.

However, that is not all that she studies. It was simply her.. starting point. Her eyes may as well change colors, her addiction has progressed far. One fateful night in the basement of the Slaughtered Lamb, and she discovered that shadow magic was not only closely related to the Arcane, but she could practice this magic openly : The Temple taught priestesses shadow magic, it must not be only frowned upon, instead of forbidden. Good enough for her to come out with her secret.

From there it has only grown, as one may expect. The elements were tried, although her abilities with those are pitiful at best. And Elune forbid she even try druidism again, it's as if there's a .. a wall between her and the ability. Only bit she could gain was some vague awareness when a "fellow" druid was nearby. That has only enhanced her envy of those embraced by Nature.

Typically one to desire pleasures of the physical sort, she has recently succumbed to her more material wants or, as she sees them, needs. Once a woman who'd give, or take, anything to satisfy herself in ways only another could, she has recently enlisted herself into the care of Goblins, spending her days and nights in the care of their Arenas, seeking the specially forged weapons and carefully made armor, they would reward her with.
Swords, daggers, fist weapons. She seeks that which brings her pleasure, and it is the pain of those who get in her way. Those who would challenge her, keep her from her goal of the perfect battle armor, will fall to their knees or on their faces. She does not care, she will have that which she wants.

Retrieved from "https://sentinels.fandom.com/wiki/Niain?oldid=6687"
Community content is available under CC-BY-SA unless otherwise noted.