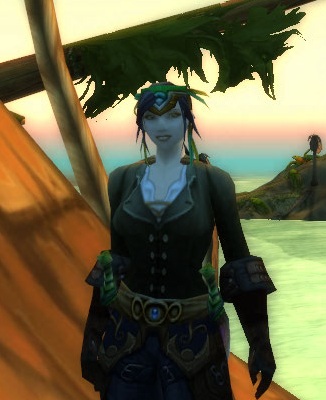 Indu appears at first glance to be some kind of wild-woman -- her hair is tangled with feathers, and she is covered with a layer of grime and dirt. She is a small woman, short and slender, yet her lean muscles seem strong and well-defined. She moves with a quickness that at first might seem reckless, if not for her feline grace and deliberate movement.

She wears a threadbare tuxedo jacket that has been carefully mended and patched.

Indu is a wild animal who seems to have no regard for or knowledge of social standards of behavior. She has a youthful sense of wonder about the world, and indeed seems to have a childlike presence about her. However at the same time she bears an extreme distrust for new people and situations. Her manner of speaking is very basic -- she often makes mistakes in her grammar, and seems to have a weak grasp on the basic rules of language.

She hates trolls and ogres with every fiber of her being. Her fear often expresses itself in outright violence. She also has developed a taste for the thrill of thievery, and can be a little bit of a kleptomaniac. She is distrustful of people who are overy formal or polite.

As far as Indu can tell, she has no mother or father. Her earliest memories are of fear – crawling into a dead tree stump for shelter during a cold rain, running away from trolls, hiding, of being so hungry and not knowing where her next meal might be. Indu raised herself in the unforgiving jungle of Stranglethorn Vale.

Right as the second war was about to break out, Indu’s father, a merchant of great wealth decided that his family's best business interests lay in fleeing to the Cape of Stranglethorn, which was known to be a neutral zone. On the trip south, however, her father’s ship was waylaid by a Horde vessel operating out of the ruins of Stormwind. The ship was damaged in the ensuing firefight, but made its way to the northern coast of Stranglethorn Vale before crashing ashore. Indu – still only a child of less than five - managed to crawl alone inland to shelter herself from the cold rain.

How Indu managed to survive the next twelve years in such an inhospitable jungle is somewhat of a mystery. The story is a long one, fraught with difficulties, but Indu learned how to survive. She learned how to remain unseen from the eyes of trolls and jungle predators alike. She survived by pilfering at night through the refuse of the local jungle trolls.

Eventually, by way of instinct and observation, she learned how to hunt for her own food. By the time she had reached the age of 13, she had learned how to fish, and make her own clothes. Always at her belt were two raptor talons that had been fashioned into daggers with leather handles. She was stealing more than just trash from the local jungle trolls now, who had started to refer to her as “Indu” meaning “pest”.

Indu knew that there must be some kind of city on the southern cape of Stranglethorn, but it was years before her curiosity overcame her mistrust. At first she would just visit from time to time to trade her stolen goods with the local merchants. Before long, however, she was a regular urchin of Booty Bay. The locals mostly all took pity on this poor unintelligible girl, who obviously was without family, and so she received alms from time to time. For the most part, however, she made her own way, and slowly taught herself common tongue as best as she could.

As the third war drew near, Booty Bay became even more of a hotspot for piracy as merchants and profiteers helped the nations of Azeroth prepare for war. The rediscovery of the land of Kalimdor only opened up more opportunities for those with gold on their mind. Indu was no exception to this, and by the time she was 19, she was a regular pirate. At first she would run the occasional security detail for the Blackwater Raiders, guarding their merchant ships as they ran supplies between Kalimdor and the Eastern Kingdoms. Eventually, however, Indu and her friends became more ambitious, and started to raid Horde supply vessels on their own initiative.

After a few years of success as a privateer, the third war started to reach it's conclusion, and the seas became tame once again. Indu had amassed a siginifigant amount of wealth, and was no longer the scared child she had been just a few years earlier, and so she decided to leave Stranglethorn and see the wonders of Azeroth for herself.

Retrieved from "https://sentinels.fandom.com/wiki/Indu?oldid=8816"
Community content is available under CC-BY-SA unless otherwise noted.